It’s not the time for Onam, but if you’re craving Kerala food and especially vegetarian, then you definitely should be visiting Regenta Central Deccan, royapettah.

The food from God’s own country is presented as a sumptuous treat at the Olives restaurant of Regenta Central Deccan. Priced at 888 nett, the buffet sure is to satisfy the Kerala food cravings.

Mrs. Saraswathi viswanathan from Thrissur Kerala, also founder of Sachuskitchen is the person behind the creation of such delectable delicacies.

The food festival is from June 21st to 30th , lunch and dinner buffet. Mrs. Saraswathi has carefully chosen each item of the menu and the striking aspect is that you don’t eat the same items on all ten days. Yes she has a different menu each day. Though the dishes seem to be the same, the variations she has given in using different vegetables sure does ring a bell in your taste buds.

Mrs. Saraswathi draws cooking inspiration from her father who passed away a couple of months back. She is now being helped by her son to manage her restaurant at Thrissur. She was soft spoken and patient enough for a casual long chat while we enjoyed the meal. The taste was heartwarming and most importantly felt at home.

Chef N.Saraswathi Viswanathan is a Record Holder in Universal Achievers Book of Records and Future Kalam Book of Records for creating a unique world record of preparing 108 dishes on spot in one hour. It was an honour to taste her cooking.

We were welcomed by Mr.Aditya , F&B manager at the restaurant. A warm welcome and detailed explanation of the hotel’s history and current happenings made it more interesting.

As we moved on to taste the food we were in for a treat looking at the elaborate spread that was waiting for us. We quickly wanted to finish the photography and proceed to tasting.

We began with the tasty drumstick soup, which was drumstick pulp infused in coconut milk. It was piping hot and definitely made mouths water and wanting for more.

The starter was raw mango pakoda, which was tangy , crisp and perfect accompaniment for the spicy soup.

We had a live counter for Malabar parotta. My my the layers were so soft and the veg moilee was the best to be paired with the parotta.

I’ve listed down the menu in detail.

But to name a few of my favourite was the yellow pumpkin olan, vada kootu curry and the jackfruit rind biryani. I never knew we could use up jackfruit rind, nendram skin to cooking and it was indeed a learning experience for me. I’d gotten a lot of new ideas to incorporate into my cooking.

We had an elaborate dessert spread. Which included pizhinja payasam, unniyapam, tender coconut payasam to name a few. 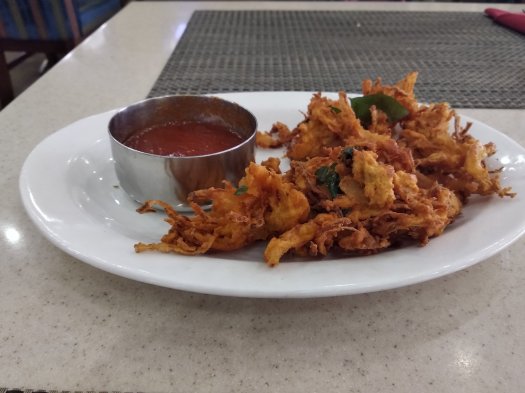 The Kerala food fest is from June 21st to 30th June. Lunch and dinner buffet priced at rs 888 nett.