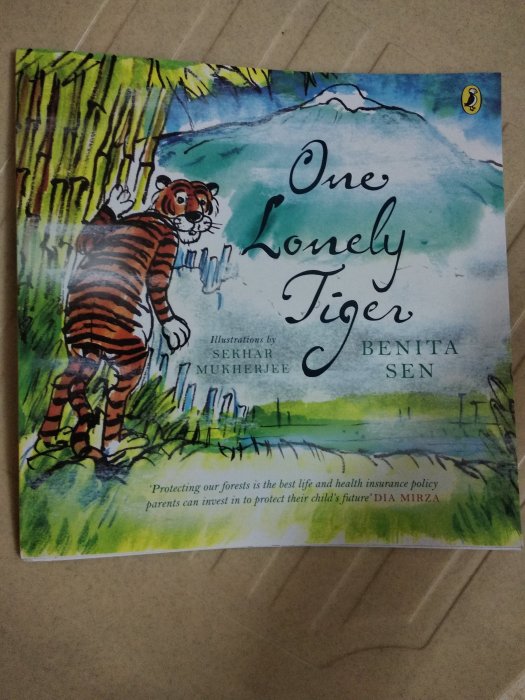 He looks down where the forest was And lets out a long, sad sigh. ‘Where did my home go?’ he cries.’Where and why, oh why?’

The rapidly shrinking forest has a lonesome, friendless tiger who is left with only his own shadow for company. Whom should he play with now that all his fellow tigers have disappeared?

In the tug-of-war over living space between people and the wild, where will the animals go if more forests are cut?

One Lonely Tiger illustrates this urgent threat of extinction and loss of habitat among valuable species, and asks the pressing question: are our trees, wild animals, birds and insects safe amidst us?

Gorgeously illustrated and thoughtfully narrated, this book sensitizes young readers to the pathos and loneliness of our wildlife and the ecological crisis around us.

One lonely Tiger. The title gives you an insight of what the story would be about. With farm lands and forests being depleted for human civilization development, do we take the time to think what would happen to the flora and fauna.

We think selfishly of our development and join hands to build corporate jungles, by destroying natural jungles. Are we being fair? The animals which we teach to our kids at home saying Lion and tiger stay with families in den in the forest, have now lost their homes and family. Do we tell the kids we are in a way responsible for such fate? I hope when we read the story to our kids, we impart them knowledge about deforestation and its ill effects and also a chance for us to know what after effects take place.

Do we care about the lives of animals’ post deforestation? No.

The lonely tiger here in this book is a story of a single tiger who wanders in the forest day and night. He has no one to be with and so ends up playing with his shadow. While wandering he comes across a group of jackals and helps them in counting their tails. And then meets babbler clan, the tiger asks them about their total numbers for which they reply they would count in the air. There comes a elephant, who the tiger tickles on climbing the trunk. The elephant laughed, helping the tiger up, but it fell down as the elephant wobbled.

Tiger meets a wise owl who suggests the tiger stick to playing hopscotch or counting tress that would make him fit to be a tiger. The tiger loving the idea begins hopscotch counting from one. HE is being cheered by the animals and when he counts to ten, he hears a loud noise of the lumberjack cutting down trees. This leaves our tiger worried that he would have no more trees to count.

So the sad tiger takes off to space to count the stars, craters on the moon and then to mars. He is being photographed by the skies, thunder and lightning. Does he feel lonely up there? Oh of course yes. When he is lonely among the stars he looks at his home on earth and cries where did the forest go and why?

And all the animals call out to him saying more trees are planted and to come back. Now after reading the book we realize that the tiger leaves its own habitat just because his home is being destroyed by selfish humans. Shouldn’t we be ashamed of these kind of deeds. Let’s pledge on this world environment day that we would preserve forests and pass over the wonderful wildlife for the coming generations.

A journalist and children’s author, Benita Sen has written several books – fiction and non-fiction – for children and young people. A couple of her stories have been included in English textbooks by a leading publisher. And some of her stories have earned recommendations internationally. …

40 Replies to “Review of the lonely tiger”