(Prequel to The Malhotra Bride) 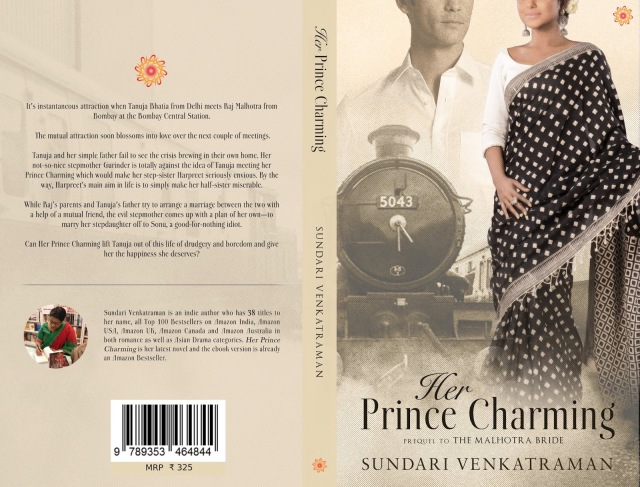 The mutual attraction soon blossoms into love over the next couple of meetings.

Tanuja and her simple father fail to see the crisis brewing in their own home. Her not-so-nice stepmother Gurinder is totally against the idea of Tanuja meeting her Prince Charming which would make her step-sister Harpreet seriously envious. By the way, Harpreet’s main aim in life is to simply make her half-sister miserable.

While Raj’s parents and Tanuja’s father try to arrange a marriage between the two with a help of a mutual friend, the evil stepmother comes up with a plan of her own—to marry her stepdaughter off to Sonu, a good-for-nothing idiot.

Can Her Prince Charming lift Tanuja out of this life of drudgery and boredom and give her the happiness she deserves?

*A prequel to THE MALHOTRA BRIDE, this book is also available in paperback in India.

Tanuja stood at the entrance to
the bogie, guarding the luggage as the train slowed down to enter Bombay
Central Station, excitement in her heart as her eyes devoured the sights. It
had been a long time since the Bhatia family had gone on a holiday, all
together. It had always been her stepmother and her half-sisters who went on
bi-annual trips, leaving Tanuja and her father at home. But, of course, both of
them appreciated the peaceful times while the other three were gone. In fact,
Tanuja considered those interludes the best holidays ever.

Just before the train stopped,
she caught sight of a tall man in pristine white trousers and half-shirt, holding
a placard which read, ‘Talveer Bhatia’. Her charcoal black eyes went wide when
they met the dark brown of the man’s bold gaze, a soft blush tainting her
cheeks before she turned away to address her father who was standing behind the
three suitcases. “Papa, the car driver’s here, I think. See that man over
there,” she pointed a slim index finger in the direction of the man as her
father craned his neck to look out, “he’s holding a cardboard placard with your
name on it.”

Talveer nodded his head at his eldest
daughter, a soft smile on his tired face. “Let’s get the luggage out,” he said,
watching Tanuja get off on to the platform. The father-daughter duo shook their
heads at the porters who offered to take their luggage as Talveer handed the
suitcases one-by-one to Tanuja.

“Have you got all the suitcases
out?” asked Gurinder in her usual harsh voice, a frown on her face as she
glared at her step-daughter and husband.

“Yes, aunty,” said Tanuja, taking
the large bag that Gurinder was holding in her hands, before helping her out of
the train.

Harpreet and Jaspreet giggled as
they watched their plump mother struggle to step down onto the platform, not
bothering to help her. They each held a tote bag carrying their make-up
articles and other fancy stuff which they naively believed were absolute
necessities in Bombay.

Talveer lifted his head to see
Raj Malhotra walking in their direction with the placard, waving to him. “I’m
Talveer Bhatia. Are you the driver who has come to pick us up from Malhotra
Cabs?”

“Yes sir. My name is Raj,” said
Raj, shaking Talveer’s hand, forgetting that drivers may be considered too
menial to shake hands with customers who hired cars from their company, his
gaze taking in the family of five even as it lingered for a few seconds longer on
Tanuja’s beautiful face.

Gurinder glared at him. “You are
the driver who will be driving us to Mahabaleshwar?”

“Apni aukat mein raho. What’s with the shaking hands? Can’t you do a
namaste? Kyunji,” as she frowningly glanced at her husband, “can’t you tell
the man that instead of shaking his hand?”

Tanuja felt highly embarrassed by
Gurinder’s harsh words. What was wrong if the man had shaken her father’s hand?
Why did her stepmother have to shout for such a trivial thing?

Before her father could open his
mouth, the driver said, “I’m sorry, ma’am. Please forgive me. It won’t happen
again.”

Gurinder looked the man up and
down before ordering, “Chalo, take
all the suitcases and let’s go to the waiting room.”

Without asking a question, Raj lifted
two heavy suitcases in both his hands before turning in the direction of the
first-class waiting room. Tanuja bent down to take the third one, giving him a
shy nod, a small smile touching her lips. Her mouth had the appearance of a
rosebud to the man who walked ahead of her.

It took the Bhatia family about
an hour to get ready. Raj waited patiently as he read the day’s newspaper
before Talveer walked out from the men’s waiting room. Tanuja was the first to
get ready and she also walked out to the platform on seeing her father. She
couldn’t help being fascinated by the handsome driver as she studied him from
the corner of her eyes from time to time, not saying anything while she watched
her father chat with him.

“I am also from Delhi, Talveerji,” said Raj, answering the other man
when asked.

Talveer smiled widely. “I did
wonder about the accent,” he said, patting the younger man on his shoulder.

They chatted some more about
their hometown but mainly in Hindi. “If you are educated, how come you are
working as a driver?” There was curiosity in Talveer’s dark gaze as he looked
up at the driver who towered over him by many inches.

Raj was careful enough to speak
English exactly the way his drivers spoke. Shrugging, he said, “I am setting up
my own business.” Okay, it was a slight variation from the truth as his garment
factory was already set up and running smoothly. But he couldn’t very well tell
the client that. “In the meanwhile, this is a good way to make money, without
having to work under someone.” It was with difficulty that he managed to keep
his gaze on Talveer Bhatia and not let it stray to the young woman who, he
presumed, must be the man’s daughter. She was simply too beautiful for words.

Talveer nodded his head
vigorously, thoroughly approving of the other man’s sentiments. “So what
business are you setting up?”

“Manufacturing of garments,
Talveerji.” No, he had no plans to
tell them the magnitude of his business, that he had invested almost ten lakh
rupees and only twenty percent of the total had been raised through a bank
loan. The rest was entirely from his own savings. Raj had slogged from the day
he arrived in Bombay five years ago. He had refused to use his father’s money
and had earned his own money starting from scratch. He had led a comfortable
life but it wasn’t half as luxurious as the one he was used to at his home in
Delhi. He had converted all the leftover money to gold. When he began
purchasing gold in 1971, six months after he moved to Bombay, the price for ten
grams had been less than Rs. 200. Over the last five years, the price had risen
dramatically to Rs. 540. He had also persuaded his father to buy small
bungalows in Mahabaleshwar and Matheran.

So, at the age of twenty-six,
where a lot of young boys are still whiling away their time, Raj had set up his
very own garment unit. And there was also the flat that he had purchased in
Matunga, where he lived now.

Talveer nodded, even as his eyes
kept turning towards the women’s waiting room, wondering about his wife and
daughters. He looked at his eldest born and said, “Tanu, why don’t you go and
find out if everyone is ready?”

“Theek hai, Papa,” said Tanuja in a soft voice before walking
towards the waiting room, her steps dragging. As if the three of them would
care.

“Madam, it would be nice if you
could tell them that we have to travel for eight hours before reaching our
destination.” Raj called out to Tanuja’s retreating back.

She stopped in her tracks,
wondering if she had heard right. Had he called her ‘madam’? She turned around
with a smile, her cheeks dimpling when her gaze caught his dark one, a dark
wing-shaped eyebrow raised in query. “Were you talking to me?”

“Ji! It will take us eight hours to reach Mahabaleshwar,” said Raj,
looking into her black gaze and rapidly found himself drowning in them, unable
to stop the answering smile on his face.

Why was he addressing her as if
she was fifty years old? Tanuja realised that she didn’t like it at all. But
then, she didn’t want to say anything in front of her father. She nodded her
head before turning away from him to continue towards the waiting room door.

After ensuring her father’s gaze
was turned away from him, Raj looked at her retreating figure encased in a salwar kameez which faithfully hugged
her slender body. She could have passed off for an apsara from heaven, he thought. 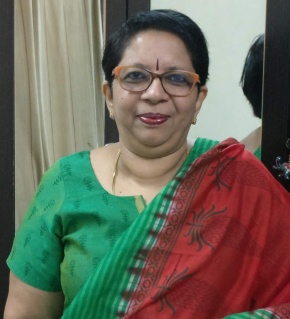 Sundari Venkatraman is an indie author who has 42 titles (38 books and 4 collections) to her name, all Top 100 Bestsellers on Amazon India, Amazon USA, Amazon UK, Amazon Canada and Amazon Australia in both romance as well as Asian Drama categories. Her latest hot romances have all been on #1 Bestseller slot in Amazon India for over a month.

Even as a kid, Sundari absolutely loved the ‘lived happily ever after’ syndrome as she grew up reading all the fairy tales she could lay her hands on, Phantom comics, Mandrake comics and the like. It was always about good triumphing over evil and a happy end.

Soon, into her teens, Sundari switched her attention from fairy tales to Mills &amp; Boon. While she loved reading both of these, she kept visualising what would have happened if there were similar situations happening in India; to a local hero and heroine. Her imagination took flight and she always lived in a rosy cocoon of romance over the years.

Then came the writing – a true bolt out of the blue! And Sundari Venkatraman has never looked back.

Click here to check out all the titles by the author…

You can stalk her @

This Tour is Hosted by

We Promote So That You Can Write